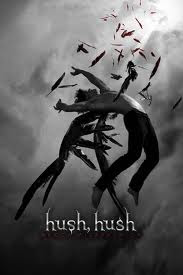 Summary:
For Nora Grey, romance was not part of the plan. She's never been particulary attracted to the boys at her school, no matter how much her best friend, Vee, pushes them at her. Not until Patch came along. With his easy smile and eyes that seem to see inside her, Nora is drawn to him against her better judgement.

But after a series of terrifying encounters, Nora's not sure who to tust. Patch seems to be everywhere she is and knows more about her than her closest friends. She can't decide whether she should fall into his arms or run and hide. And when she tries to seek some answers, she finds herself near a truth that is way more unsettling than anything Patch makes her feel.

For Nora is right in the middle of a centuries-old battle bettween the immortal and those that have fallen- and sooner or latter, she's going to have to pick a side...

Even though the book was almost 400 pages long it only took me a surprising 5 days to read the book. After reading the prologue it make me more curious and made me want to read more.

From reading the prologue you can already have an idea who the man demanding the service is, then as you go through the story it does become way more clearer, but what you’re then thinking about is who is this Chauncey character? What service does the other man want him to do? What is a Nephil?

The story was gripping straight from the first page of the first chapter. It was interest and straight to the point. You could easily get the since of what Nora felt when Patch was moved to the seat next to her and also how Patch was quite intimidating by just knowing all the thing that he knew about Nora.


The time line was good in the way it flowed. The story had lots of really good point though, I loved Patch's personality. The way that he just said nearly everything that he felt in a teasing way to Nora. And I thought that it was creepy and inviting all at the same time when Patch was stalked Nora. The passion that they have together has to honestly be one of the best parts for me. It was sexy, subtle at times and totally out there at others (defiantly not a bad thing.)

With Nora Grey’s personality it made the story more interesting in my opinion. With her always interested in finding out what's going on with Patch and Elliot, it makes you more interested and curious about what really goes on in their heads and it keeps you wondering and guessing, but not for long just enough to build suspension.

Verdict:
I feel in love with this story and I can't wait to read the next book.I hope you get a chance to read this amazing book!